Skip to main content and our Accessibility Statement may be found in the footer of our website.
Back To News

WORCESTER – For patients in heart failure who are too frail for surgery, there once was resignation to fate; now there is new hope. St. Vincent Hospital's cardiovascular interventional room is taking the long-held medical profession maxim "first do no harm" to new levels with non-invasive, non-general anesthetic valve replacements.

Officially called trans-catheter aortic valve replacement, or TAVR, the surgery is for people who have the degenerative heart disease known in medical terms as critical aortic stenosis.

What that means, according to Cardiologist Dr. Joseph Hannan, is that plaque has built up around the aortic valve to such a point that the valve no longer functions properly. Put simply, the heart can no longer reliably push blood in the body's largest artery, the aorta

The traditional solution is a valve replacement by way of open heart surgery. But, even for a moderately healthy patient, the process of cutting through the breast bone and opening the heart while running bodily functions, such as breathing and circulation, through a machine poses heavy risk. For severely ill patients, or those too frail due to age, the surgery simply could not be done.

Once symptoms to what is a slow-building health problem begin to show, the average length of survival can be as little as one year without a valve replacement. The only effective treatment for this condition is replacing the heart valve.

"For those with no prospects, they are facing a very high risk of death in a year or so," Hannan said.

That is, until TAVR, which uses a catheter, inserted into the patient's groin, to replace the heart valve. In itself, the TAVR is less invasive and an option for many that traditional open-heart surgery is not.

As of last week, Saint Vincent's had done 41 such surgeries, to great success, Hannan said.

In Worcester, TAVR is also being done at UMass, according to Saint Vincent's Executive Director of Cardiovascular Surgery, Melinda Darrigo. However, Saint Vincent has opted to go one step further. TAVR surgery is now doing the surgery under moderate sedation, not general anesthesia.

"The preliminary results after 30 days is looking quite favorable," Hannan said. "It may actually have a lower complication rate."

The difference between general anesthesia and moderate sedation, even when the body is not being cut open, is the state of unconsciousness. Using general anesthesia that requires the use of several "invasive monitoring devices," like a tube in the esophagus to monitor the surgery and a ventilation tube to support breathing.

With TAVR, Saint Vincent's surgeons are using a surface echo to monitor the catheter's progress, not a camera, which requires a second line inserted into the body.

"With general anesthesia, patients often wake up weak and sick, and, in cases of advanced age, with cognitive confusion," Hannan said. "With moderate sedation, it is like they are sleeping. They are breathing on their own."

Such was the experience of Josephine Capone Horning, 85, who had TAVR on Oct. 14 and said she was home within 48 hours. Aside from some slight tenderness where the catheter was inserted, Horning said she did not feel like she had surgery.

"I'm feeling great," Horning said. "It is just amazing to think that someone was fooling around with my heart and I didn't feel a thing. Nothing at all."

Horning, who uses a walker, said the catheter-based surgery was offered to her because of the lengthy recovery rate that was expected with traditional surgery.

It was not her first surgery, and she recalls her recovery time after general anesthesia as being very different. She woke up sick, with a sore throat and spent several weeks in the hospital and many more fully recovering.

"This time, I felt like I took a nap," she said. "It was such a big difference. They even told me I was cleared to drive."

The surgery for high-risk patients, those who cannot get the surgery due to high risk of mortality, means many will live to their natural life expectancy and beyond, Hannan said.

And that is what makes the procedure important to publicize, Hannan said.

The first human valve replacement was done via catheter more than a decade ago, in 2002. It has been heavily used and refined in Europe, and last year the federal Food and Drug Administration approved the moderate sedation.

But the surgery it is still not an option many family doctors are discussing with their patients, Hannan said. That means, many patients who could otherwise return to healthy lifestyle and natural lifespan may simply accept their fate.

"It is an alternative for people who are turned away because they are considered high risks," he said. "For others, to offers a better quality of life. Some people may find out what is involved in traditional open-heart surgery and they may make that self-determination to disqualify themselves from a valve replacement. If they were aware of TAVR, they may not be so quick to say, 'this is not for me.' " 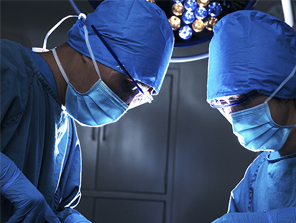 Get our advice and upcoming events about weight, pain, heart and more.
Sign up for our eNewsletter

Need a doctor for your care?
Use our Physician Finder